Our Bird of the Bible this week is not on the “unclean” list for a change. In fact, this bird can be eaten and is raised just for that purpose in many parts of the world. Searching the internet, you can find all kinds of recipes for quail. What has that got to do with our Quail?

The children of Israel were in the wilderness, doing their constant grumbling, and they asked for “more to eat”. They were not satisfied with what God was providing. They wanted “more.” So:

And the LORD spoke to Moses, saying, “I have heard the complaints of the children of Israel. Speak to them, saying, ‘At twilight you shall eat meat, and in the morning you shall be filled with bread. And you shall know that I am the LORD your God.’ ” So it was that quails came up at evening and covered the camp, and in the morning the dew lay all around the camp. And when the layer of dew lifted, there, on the surface of the wilderness, was a small round substance, as fine as frost on the ground.(Exodus 16:11-14 NKJV)

Now a wind went out from the LORD, and it brought quail from the sea and left them fluttering near the camp, about a day’s journey on this side and about a day’s journey on the other side, all around the camp, and about two cubits above the surface of the ground. And the people stayed up all that day, all night, and all the next day, and gathered the quail (he who gathered least gathered ten homers); and they spread them out for themselves all around the camp. But while the meat was still between their teeth, before it was chewed, the wrath of the LORD was aroused against the people, and the LORD struck the people with a very great plague. So he called the name of that place Kibroth Hattaavah, because there they buried the people who had yielded to craving.(Numbers 11:31-34 NKJV)

The people asked, and He brought quail, And satisfied them with the bread of heaven.(Psalms 105:40 NKJV) 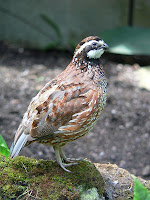 The commentaries on these Scriptures varied somewhat. Some suggested that these were not “quails” but “locusts”. Most concede that they were “quails”. Then, they debated about the “about two cubits above the surface of the ground.” Were they piled two cubits high or were they flying around at that level? If they were piled deep, they would suffocate and die, making them uneatable according to their law. So, with these questions in mind, here is how the Quail behave:

“Rapid direct flight, series of several stiff wing beats followed by a short glide”, “Escapes danger by running. Direct flight with rapid deep wing beats”. “Small, chunky, short-tailed, round-winged, ground-dwelling bird”, “Secretive. Squats and sits motionless when alarmed”, and “keeping hidden in crops, and reluctant to fly, preferring to creep away instead. Even when flushed, it keeps low and soon drops back into cover.” Sounds like they would be easy to catch. 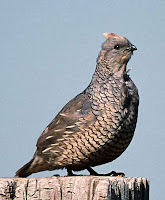 “There are 130 species of quails worldwide. They are small, short-tailed game birds of the family Phasianidae (order Galliformes), resembling partridges but generally smaller and less robust. The 36 species of New World quail more nearly resemble Old World partridges”, from From borealforest.org, “California Quail.”
We have the California, Scaled, Mountain, Gambel’s(The bird’s average length is 11 inches (30 cm) with a wingspan of 14-16 inches (35-40 cm), Montezuma Quails and the Northern Bobwhite here in North America. Several have a head plume and many are quite colorful.