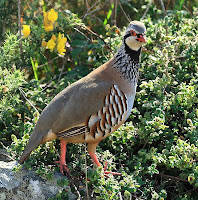 “The Partridge is only mentioned twice in Scripture. In Jeremiah, the fact is that other birds put their eggs in the nest of a partridge and then expect the nesting bird to do all the work, sitting, feeding, and fledging the chicks.”

I made the following observation in the first Partridge article:

I, the LORD, search the heart, I test the mind, Even to give every man according to his ways, According to the fruit of his doings. “As a partridge that broods but does not hatch, So is he who gets riches, but not by right; It will leave him in the midst of his days, And at his end he will be a fool.” (Jer 17:10-11)

“3. RLP(Red-legged Partridge) will lay their own nest, but will also dump odd eggs in other species nests. Where this is a pheasant, the pheasant (as found in the UK), being probably the stupidest of all birds bar none, will hatch and “rear” the young quite happily. A grey partridge, on the other hand, will abandon the nest. Terminated. And … almost certainly does not attempt to lay again that season.”, A quote from a “Bird Forum“

“Curiosities: while brooding the female is very sensitive, and, if disturbed, may abandon the nest.”, about a Rock Partridge from Parco Nazionale…

“In the deep woods where the California partridge nests, it is not unusual to find the eggs of that game bird in the nest of the Oregon Towhee. Mr. Cohen, of Ala- meda, records one Towhee nest four feet from the ground on a live-oak stub and containing four Towhee eggs and fifteen eggs of the partridge. Another recorded by him was on the ground, and contained three eggs of the Towhee and eighteen of the partridge. The Towhee abandoned the nest after six partridge eggs were laid, leaving the partridge to rear the brood. Inasmuch as the Towhee eggs hatch in two weeks, the young being very dark colored and naked, while the partridge eggs require three weeks and the young are lively little balls of down able to run about as soon as dry, the sacrifice of the Towhee’s brood is inevitable whenever the two are deposited in the same nest.” from Birds of California

I could give more examples, but it is obvious that the Partridges are leaving their eggs in other nests. “They are brooding but not hatching.” She is trying to raise her chicks, but not in the proper way. That is what the verse is saying, that the Lord searches the heart and tests a person’s thinking. It is then applied to making money the wrong way (crooked) and then having it disappear and then he is a “fool’ in the end.

The verses in Jeremiah 17:10-11 are in the middle of a great passage about trusting in the LORD.

(5) Thus says the LORD: “Cursed is the man who trusts in man And makes flesh his strength, Whose heart departs from the LORD.
(6) For he shall be like a shrub in the desert, And shall not see when good comes, But shall inhabit the parched places in the wilderness, In a salt land which is not inhabited.
(7) “Blessed is the man who trusts in the LORD, And whose hope is the LORD.
(8) For he shall be like a tree planted by the waters, Which spreads out its roots by the river, And will not fear when heat comes; But its leaf will be green, And will not be anxious in the year of drought, Nor will cease from yielding fruit.
(9) “The heart is deceitful above all things, And desperately wicked; Who can know it?
(10) I, the LORD, search the heart, I test the mind, Even to give every man according to his ways, According to the fruit of his doings.
(11) “As a partridge that broods but does not hatch, So is he who gets riches, but not by right; It will leave him in the midst of his days, And at his end he will be a fool.“
(12) A glorious high throne from the beginning Is the place of our sanctuary.
(13) O LORD, the hope of Israel, All who forsake You shall be ashamed. “Those who depart from Me Shall be written in the earth, Because they have forsaken the LORD, The fountain of living waters.”
(14) Heal me, O LORD, and I shall be healed; Save me, and I shall be saved, For You are my praise. (Jeremiah 17:5-14 NKJV)