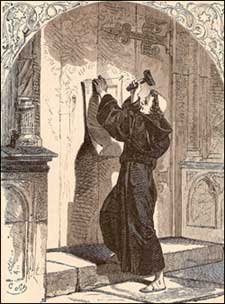 On Sunday evening, October 3, we celebrated the beautiful ordinance of the Lord’s Supper. I will always be grateful that Jesus established this wonderful remembrance of His sacrifice for His followers to reverently celebrate together.

The ordinance was preceded by another thought-provoking sermon by Pastor Osborne. The theme of the sermon was God’s amazing grace. Other than Jesus, what person do we most often associate with the word, “grace?” I believe most of us would answer, “Martin Luther.”

Did you know Luther posted his ninety-five reasons the Church needed to reform on the day now celebrated as Halloween? It was October 31, 1517 when this humble monk turned the religious world of his time upside down. He knew how desperately the world and the Church needed to know we could gain grace only through faith. He dedicated his life to discovering and preaching this truth.

Luther was born November 10, 1483, into a poor family of German woodcutters. Realizing that their son was gifted, Luther’s parents scrimped and saved to send him to the university, where he studied law. Returning home from school on foot, he and a friend were caught in a thunderstorm, and his friend was struck by lightning and killed. This terrified Luther, and he vowed to enter a monastery so he could search for God. One question plagued him without ceasing: How could he, a sinful man, ever become pure enough to stand in the awesome presence of a holy God who was an all-consuming fire? Luther spent years trying every way he knew to purify his soul. He spent hours each day confessing his sins. He beat himself with a whip until he became bloody and unconscious. He prayed for six weeks, fasted, and slept very little. He stayed out all night long, naked, in the deep snows of Germany.

But one day the Lord spoke to him through the Scriptures, specifically Romans 1:17: “The just shall live by faith.” Suddenly Luther saw the gospel! He discovered God’s grace! He realized that only those justified by faith in Christ’s blood will live and those who seek to justify themselves in any other way shall not live. Luther spent the rest of his life promoting and defending this truth. Even when he was on trial, faced with being burned at the stake, he clung fiercely to it. Justification by faith is still our great hope and joy.

(Taken, in part, from, New Every Morning, by Dr. D. James Kennedy.)