April 3, 2011 dawned sunny and clear after a week of storms that brought cooler temperatures. It was a perfect day for Faith Baptist Church to dedicate its new family life center.
Worship and Praise

That morning we held our annual April Faith Day Praise Service of remembrance and worship. It included the baptism of three children, speeches, music, and a sacrificial offering. Dorothy Malcolm, a charter member, spoke on “What God has Done.” She rehearsed how God has taken the congregation through difficult as well as good times, including having one of our former pastors collapse in the pulpit and die a few days later. Pastor Osborne says that Faith’s past and “how God has brought us to this point is truly nothing short of amazing.”

John and Becky Corbett, who have been at the church 18 years, spoke on “What God is Doing.” John says: “The bedrock Biblical principle that has been preached from this pulpit is that the only reason we exist on this planet—as individuals, as families, and as a church body—is to bring glory to God. What we see today at FBC, true to its mission, is a place where Christian leaders are cultivated from a very young age.” He also says, “The greatest successes we’ve enjoyed as a church, and when we’ve been at our very best, has been when we’re focused beyond the walls of this building.”

Pastor Osborne spoke on “What God May Do,” outlining his vision for the ministries Faith Baptist Church can have in Winter Haven: a Christian school, a seminary, continuance and growth of Faith Extreme, a high-rise for seniors, growth of Faith’s 100, and a Christian resource center/bookstore/coffeehouse.

Music included a song by a quartet featuring Associate Pastor Jerry Smith (a “senior saint”) and three young men: Caleb and Jesse Padgett and Reagan Osborne. The choir and orchestra beautifully performed several numbers, and Associate Pastor Peter Brock led the congregation in responsive praise readings. Pastor Osborne says the congregation’s “Holy, Holy, Holy” and “To God Be the Glory” were “the exclamation point of praise.”

Presentation of the Keys
Following the worship service, the congregation went outdoors to watch Oakie Osborne, 22, parachute into a roped off area and present a key to the chairman of the deacon board, James Barfield.

Church members George Durham (pilot); Sarah Osborne, 16, (copilot); and Byron Worthington (jump master) were the flight crew. Kent Sawders held a flag to indicate where Oakie should land. Pastor Osborne gives some insight into the jump: “Byron helped George Durham remove the plane door before takeoff.” As jump master, Byron relayed information from George to Oakie, told Oakie when the plane was in the proper position, and told Oakie to go. Pastor also says, “If the jumper refuses to go, the jump master throws him out.” He also says that seeing “my son hitting the target from 5,000 feet up,” was one of the day’s highlights.

Afterward, the crowd moved toward the new building, where 30 women, part of a ministry to widows called Flamingos, cut the ribbon. Flamingos founder Georgia Stickney says: “Each one of them was honored to have this opportunity to praise the Lord for what He has done.” Georgia says there were two special highlights for her: to hear and see the Flamingos’ excitement as they participated and that two Flamingos, Johnie Osborne and Doris Tassell, were able to watch their grandson Oakie parachute onto the grounds. “This allowed them the opportunity to see his accurate and awesome precision in landing right on target. What a memory for them and all of us as a church family,” says Georgia. Pastor Osborne says that watching the Flamingos was a highlight for him, too, specifically, their “joy at knowing God still uses them.” The Flamingos participation was a reminder that “we can serve with enthusiasm at any age and in any stage of life,” says Pastor.

Baptist Fellowship (aka The Meal)

Attendees then went into the gym for a meal. Jared Malcolm, who led 30 volunteers to prepare and serve the food, says they served about 750 hamburgers. Jared says: “I grew up in this church. It was exciting to see an addition to the campus and to be a part of that addition.” Jared spent 15 hours at church that Sunday but says it was worth it “to see what God did and how smoothly the food was served, how everybody enjoyed it, and how God was blessed.” This was also a highlight for Pastor Osborne, who says, “I truly enjoy watching people use their gifts and talents for God’s glory. Jared Malcolm, John and Florence Gerharz, and all the college kids serving food and helping people find seats and doing that with joy is incredible.”

As the meal concluded, the dedication ceremony began. The Voices of Faith, a choir composed of teens and young adults, sang, “My God Is a Mountain Mover.” This, too, was a highlight for Pastor Osborne. He enjoyed “Pastor Jerry and Voices of Faith singing their hearts out for a mountain-moving God.”

Pastor Osborne; Bryan Hunter, deacon and building committee member; James Berry, chairman of the building committee; and James Barfield glorified God and shared their appreciation for the men and women who worked on the project. After rehearsing what God had done, James Berry said, “I can’t wait to see the souls that get saved out of this building.”

James Barfield says, “Our church and our pastor have long held the view that the church should not go into debt to build, that if the Lord would have us to build, He would provide the resources.” Over the course of 16 years, God enabled the church to pay off its remaining mortgage ($400,000) within 14 months and to purchase land ($440,000) and build the new building ($2.1 million) totally debt free.
James continues: “In the midst of this terrible economy—and Polk County has been exceptionally hard hit because of the heavy concentration of construction-oriented jobs—in the midst of that the Lord provided a brand new building, 100 percent paid for, that we’re able to open as a testimony not only of how great God is but also the vision that our pastor had. Now we are able to bring a hurting community into this building and minister to them.”

As part of the ceremony, James Barfield and Bryan Hunter presented plaques to David Norris Engineering and Rodda Construction. Pastor Osborne said that hearing Bryan Hunter, James Berry, and James Barfield “bringing glory to God by thanking all those involved with humility and gratefulness moved my heart.”

While the vision for ministry rests largely with Pastor Osborne, the deacons have played a large part in making that vision come to life. Of the men who have served as deacons, Pastor Osborne says: “In the last sixteen years of ministering at Faith, every deacon has had a special place in my heart. They and their wives have served the Lord and His church faithfully and sacrificially. I lean upon their strength, encouragement, and godliness. Their wisdom, patience, and accountability, along with their selfless service is simply invaluable. There is no way to adequately describe how much they are worth. Every one of them is a gift from God to the church. We thoroughly enjoy serving God together.”
At the conclusion of the dedication ceremony, the church families were invited to take home a souvenir mug with a full-color rendition of the architect’s drawing of the new building.
Let the Ministry Begin, Expand, and Grow
Pastor Osborne says: “We want to go beyond this place and take the gospel to the entire community—all to the glory of God.” The Family Life Center will be used for the following ministries at least: 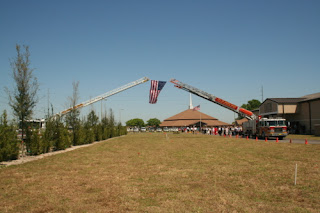 Vision for Tomorrow
As for the future, Pastor Osborne says: “We believe the next project is a new auditorium building with a few classrooms, a large nursery suite to include a special-needs unit, a 200-seat wedding/funeral chapel, and a new office suite.” The grounds would be landscaped to include “gardens along the lake for peaceful and quiet meditation.” Renovating the existing auditorium would be included, changing it into a two-story classroom building.” He says the price tag would be $6 million; then he reminds us, “God can do anything.”