When you learned that FBC was going to help pay for Caleb Padgett and Dean Corbett to go to Niger on a missions trip, it may have sounded like a relatively short event—a few months to raise money, get passports, be inoculated, and make plans, followed by three weeks on the ground in Niamey. But the reality is, Caleb and Dean’s missions trip was three years in the making.

Dean and Caleb probably would never have gone to Niger—at least not as a two-man team—if it hadn’t been for the Cross Training program. Cross Training is a three-year program with the goal of providing “the training, tools, and encouragement necessary for teens to ground themselves in Bible doctrine and practice.”  Learn more about Cross Training in Monday’s post.
Read below as Dean & Caleb share their thoughts on their trip to Niger.

We spent 25 days in Niger. We chose to go to the Totmans because they are fully supported by our church. I remember being only seven or eight years old and praying for them every night. The gradual history made the missions trip even more fulfilling. Before the missions trip, the Totmans were good acquaintances; now, after the trip, I would call the Totmans good friends. We spent a lot of time getting to know their family.

We spent the trip helping Pastor Dave with his day-to-day tasks. During the school year, his main ministry is the students at Sahel Academy. He is their youth pastor. However, the students are gone during the summer, so Pastor Dave works on a variety of maintenance projects, as well as administrative and security duties. On the trip we helped put a roof on the new administration building and install speed bumps and light poles.

For me, the highlight of the trip was getting to know the Totmans. Mrs Anora was very hospitable. I enjoyed the opportunity to see what they do every day.

The worst thing about the trip was when I got sick. About a week into the trip, it looked like I had the symptoms of malaria (weakness, fever, nausea, and aching), but it turned out that I had some sort of virus instead. It went away after a couple of days, but the worst part was being unsure of the future and whether I would be healed.

God taught me a real respect for the Totmans and other missionaries in third-world countries. He also gave me compassion for the people who live in Niger. I believe that they generally relate to the gospel better than Americans because their lives are much like that of Jesus and the disciples. The women draw water out of a community well, and everyone needs to wash their feet because they don’t wear shoes and the road is of dirt.

I realized about two days into our trip that our main ministry was helping the Totmans, but if that was the only goal of the trip, they could have gotten local labor much cheaper than our plane tickets, room, and board. We came to Niger to be more than expensive labor. We came to Niger to get to know the Totmans and to invite God to change our hearts and minds.

We had quite a few choices of where to go on the missions trip. Niger is one place we hadn’t been, so we decided to go there and see what it’s like. Plus we all knew Dave and Anora [12–13 years, in Caleb’s case], so it would be nice to see them and to see what it is like for them out there. They’re a good family and a lot of fun.

Getting a feel for what missions life is like, especially in a third-world country, is a very incredible thing. It grips your heart. After being there a while, you’re like, “I know these people. They’ve been my family for the last couple weeks. I don’t want to leave.” For me, the trip was a great opportunity to get a feel for what God could have me do in my life—to be able to experience it, hand-on-hand, and being able to see it and the stuff the missionaries live through and all that. I’m really glad I got to go. 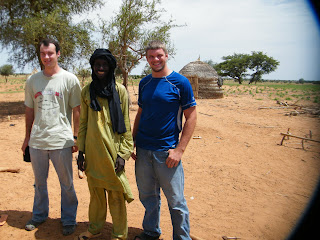 The highlight of the trip was going in the bush with a couple of other missionaries. We went to a Gourma village [from the Gourmantche people group, who live in southeastern Niger]. It took about an hour and a half to two hours to get there; we were really far out. These missionaries have gotten through to the villagers by using their language. It took one missionary about 13 years to learn the language completely. He’s been out there close to 20 years. The missionaries taught on baptism that Tuesday because the people were asking about it. It was cool to see that happening. Another highlight was how the Nigerians worship; it’s a lot different from over here. Their worship is very joyful. They don’t sit still for long. Over here, we mainly sit still. So it was definitely a new experience for me. 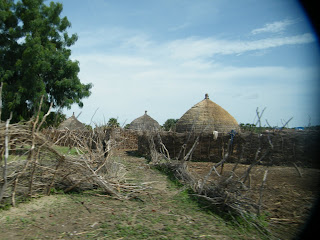 For me, the worse thing about the trip was seeing how the people live, compared to how we live here. Over there, there are piles of trash everywhere. And over here we have dump trucks to pick it up and take it to the dump, and their dump place is pretty much wherever they want it. They walk all over it, and it doesn’t faze them.

One thing God taught me was that I needed to open my eyes to different opportunities that I’ve been given and need to be thankful for and that I’ve taken for granted. He also taught me that I need to be humble that I was getting to do this. God really opened my eyes to missions—it’s definitely a possibility in my life. So I need to have a willing heart and be willing to say yes instead of being hesitant, to be patient, to wait on God, and be willing to let Him take me where He wants me to go.

Before the trip, I had to raise money. Realizing that the church was going to pay for my flight there and back was a good thing that I was thankful for, but having to raise that much [$800–1,000 more] was really hard.

By the end I had about $300 more I had to raise two or three weeks before we left. I was like, “I have to find a way to get this.” And God provided it. So God also taught me patience in that area—learning to wait and realizing God will provide in His own time and on the right time.

Our greatest accomplishment was probably not what we did, but just that we showed up We showed up and were there for Dave and Anora, to be an encouragement and to help out with anything they needed. We moved some pretty big stuff—a 300–500 pound speed bump that had been cut in half and one that was whole. But I think the biggest thing we did was we were there for Dave and Anora. We asked them questions about what they need. They need a maintenance man very desperately, and they need some other things.

The trip was, overall, a great experience.