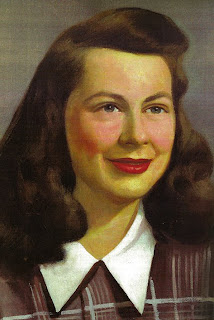 Norm Hammond is a member of Faith Baptist Church. Today he writes about a big mistake he made years ago.

In your marriage did you ever make a big mistake, a blunder, and error, or a faux pas? I did. In October of 1950, I was recalled to active duty in the Naval Reserve because of the war in Korea. Doris and I had been married 13 months when I received my orders to report to the staff of Comtrans Div 21 in Little Creek, Virginia. During my tour of active duty with Comtrans Div 21, my command was ordered to the Mediterranean for a tour of duty lasting four months.

Our first port of call was Gibraltar for change of command. During our first few days in Gibraltar, British and Spanish vendors came aboard ship to see their merchandise. One of the vendors was selling hand painted portraits made from snapshots. I had a very nice snapshot size picture of Doris in my billfold. From the photo to portrait examples he showed, I could see that a portrait of her would be a very nice souvenir. I gave the photo to the vendor and contracted to have the portrait painted for twenty dollars, a tidy sum in 1951. Since the snapshot was in black and white he needed to write down the colors to use; brown hair, brown blouse, white collar with white checks, brown eyes and eye brows. No payment was necessary now, satisfaction guaranteed upon completion of the 13×17 inch oil on canvas painting. In four months when we were back at Gibraltar, the vendor would return with the finished picture and collect the twenty dollar quoted price.
Four months later, we were in Gibraltar for change of command to another group of ships. The vendor came abroad and tracked me down to deliver the oil portrait. He un-wrapped the portrait so gingerly; you would have thought it might have been the Mona Lisa. When I saw the finished work, I could see that it was well done; however, there was something I could not explain about the portrait. It did not look right. His persuasive manner prevailed and I have him the money for the portrait. I tucked the portrait in a tube and put it in my luggage and began my journey back home.

We arrived in Little Creek, Virginia in mid October after 15 days at sea. Our second child was due in late November, so I have requested leave after he was born. Our first son was born on November 28th and I returned home to see the new addition. When I unpacked my things I found the tube with the new portrait inside. I proudly gave it to Doris as a memento of my return from sea duty. She opened the tube and unrolled the portrait and examined it with great expectation. There was a long silence, I thought, “Oh no, she sees the same thing I did when I decided to take the portrait, she’s not pleased with it”. Finally Doris said, “My eyes are blue, not brown!” I was speechless. I felt like an animal that had walked into a trap and the door slammed shut. How do I get out of this? Well, sometimes you don’t. I had made a big mistake, a blunder, and error, a faux pas.

I’m glad Doris does not hold a grudge. She could have said, “That’s all right honey, I forgive you,” but she didn’t. In fact she didn’t say anything at all except, “my eyes are blue.” I volunteered to have the brown eyes painted blue by an artist and she said, “Ok” without much enthusiasm. The eyes were painted blue by Doris and the portrait went back into the tube for safekeeping.


The portrait stayed in the tube amongst our stuff through two more children and five moves, the last one being our move to Florida after I retired. That adds up to 43 years the portrait stayed in drawers, closets, and chests. After our move to Florida in our present home, Doris decided to take the portrait and have it framed. After all those years, the portrait with blue eyes was framed and ready to hang. After considering several places to hang the portrait, she decided to hang it on our bedroom wall. The particular place where this hangs is directly in my sight as soon as I wake up and the last thing I see when I go to sleep. I think it was to remind me twice a day of that big mistake I made 43 years ago. I’d rather believe that after 43 years Doris is saying “I forgive you for your big mistake.”

Other Posts by Norm Hammond: