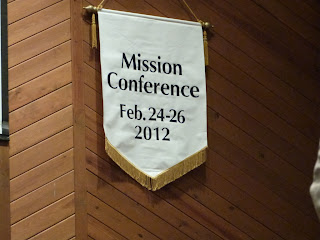 The 2012 Missions Conference began Friday night. Chaplain John Murdoch opened the conference by preaching from Exodus 3 and 4. He pointed out how the shepherd’s rod Moses had in his hand (4:2) became “the rod of God” (4:20). He challenged everyone to use for God whatever He has placed in their hands. Read more about the Murdochs.

Saturday
The next day we ate breakfast with the missionaries. The delicious meal was prepared and served by men of the church and Beth Brown. Following the meal, Pastor Brock divided us into three groups, who rotated between the auditorium, the chapel, and the fellowship hall to meet with our missionaries. 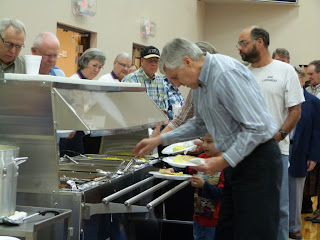 Curt and Bonnie Jones work in the Far East, including China. They encourage and minister to missionaries and national pastors in those countries. Read more about the Joneses.

Jim Blizzard and our own Jim Phillips and Sean Fielder talked about the partnership between Child Evangelism Fellowship and Faith’s FX program. All the local elementary schools that Jim Blizzard contacted about having after-school Good News Clubs turned him down. So FX busses kids from Westwood Middle School to the church as part of its ministry. Read more about Jim Blizzard.

Sunday
During the Sunday School hour, Chris and Diane Marine reported on the transition from their previous mission to Faith Baptist Mission. Read more about this transition. They also reported on their current ministry. Listen to their report.

Sunday morning, Dr. Jim Jeffery, president of Baptist Bible College and Seminary, preached “Training Up Timothys.” He defined missions as “the extension of Christ’s redemptive mandate in this world.” He said,

Sunday evening, Pastor Brock questioned the missionaries. We learned what Scripture verse or passage has most impacted each missionary’s life (the book of Romans won), what each one enjoys most about ministry (people), and the biggest discouragement faced daily in ministry (various answers). Curt Jones and John Murdoch told how God led them from the pastorate into their current ministries, and several shared stories of how they personally have seen the gospel change a life. Listen to the Q&A time.

“The message was that, little as the kids are, God has put something in their hands. As they grow, they should look for what that is.”

Helen taught an object lesson Friday night, using 25 different styles of gloves as the objects. She pointed out that a glove has no value until someone puts it on. She encouraged the children to put themselves into the things that interest them, and use them for God.

The next day the kids enjoyed singing and skits put on by young adults, as well as their own round robin. Three classrooms were spectacularly decorated to match the missionaries’ countries. Lisa Brock taught the children about Chaplain Murdoch’s ministry, Kelly Hill talked about CEF, and Jennifer Taylor taught about China and the Joneses’ ministry there.

Pastor Brock, says the conference reached the goal of encouraging people—even kids—to use their gifts to minister the gospel in local areas and around the world.

Other Posts from the 2012 Mission Conference: