Owls are an interesting species. Most of them are nocturnal, so we don’t see them very frequently. At least I don’t see them, but since I like to stay up late, I have heard them at night. Sometimes they are thought of as wise and drawings are made of them with glasses. Maybe that is because they have such huge eyes in respect to their head size. God has given them great ability to see at night with more rods than cones in their eyes that help gather light. They do not move their eyes up and down or side to side as we do, but instead move their head. No, they do not turn it all the way around. They can turn it 270 degrees though.
When owls fly, they are swift and silent as they hunt for prey, such as small animals and rodents. Their wings were designed to give them stealth. Their hearing is very sensitive and they can locate prey even if there is very low light. The sound of an owl can be “eerie” or of a “hoot” or “screech” sound. 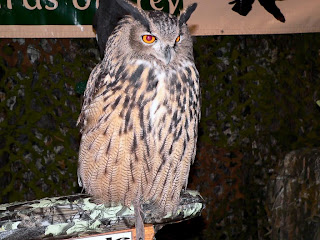 Here is an interesting quote from Wayne Blank’s Birds of the Bible. “Some insects and other creatures wear a disguise which actually frightens birds away. Most small birds are afraid of owls, and one insect has a clever way…the owl butterfly has large ‘eyes’ on its wings.”

The destruction of Babylon in Isaiah 13:19-22 mentions the owls that inhabit the deserted or wasted area. In comparing verse 21, it was interesting how the different Bible translations described them. Here are a few examples: “full of doleful creatures” (ASV); “hoot owls” (CEV); “ful of great Owles” (Bishops); “howling creatures” (ESV); the KJV, NASB, and NKJV all call them “owls”; and the MSG has “vacant houses with eerie night sounds.”

In Isaiah 43:20 the beast of the field, dragons, and owls honor the Lord because he has given water in the wilderness and rivers in the desert to provide drink for them. The next verse tells of his people giving praise. This brings to mind the hymn, Fairest Lord Jesus
Fairest Lord Jesus! Ruler of all nature!
O Thou of God and man the Son!
Thee will I cherish, Thee will I honor,
Thou, my soul’s glory, joy, and crown!

Fair are the meadows, Fairer still the woodlands,
Robed in the blooming garb of spring:
Jesus is fairer, Jesus is purer,
Who makes the woeful heart to sing.

Fair is the sunshine, Fairer still the moonlight,
And all the twinkling starry host:
Jesus shines brighter, Jesus shines purer,
Than all the angels heav’n can boast.

Beautiful Saviour! Lord of the nations!
Son of God and Son of Man!
Glory and honor, Praise, adoration,
Now and forevermore be Thine!

I have really had a difficult time deciding what to put in this blog. There were so many good items to choose from.
Owl Video
Long-eared Owl with yellow-orange eyes from Germany

Two articles from Creation Moment:
Parents Who Are Wise as Owls
Calculating Owls

Funny Owl and the Water Sprinkler