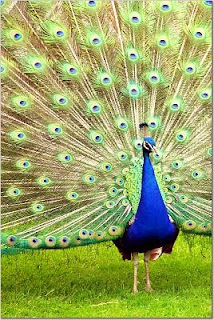 The Peacock is the male and the Peahen is the female in the pheasant family, Phasianidae (order Galliformes), that consists of the blue or Indian peacock and the green or Javanese peacock which is quite aggressive. More recently they discovered a Congo peacock. Peacocks and peahens are not native to North America, but are found in many zoos here. 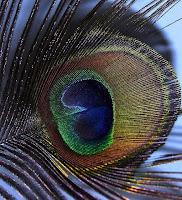 “are coloured a brilliant metallic green. This train is mainly formed of the bird’s upper tail coverts, which are enormously elongated. Each feather is tipped with an iridescent eyespot that is ringed with blue and bronze. In courtship displays, the male elevates his tail, which lies under the train, thus elevating the train and bringing it forward. At the climax of this display the tail feathers are vibrated, giving the feathers of the train a shimmering appearance and making a rustling sound. When he is courting, the male lifts his tail feathers up in a beautiful display to attract the female.” From Britannica Online, “Peacock”.

In Job 38, God started answering Job and began asking him questions about many things. By the time we get to Job 39:13, God asks:

Gavest thou the goodly wings unto the peacocks? or wings and feathers unto the ostrich?

When Solomon was the King of Israel, he was very wise and wealthy. One of the things he did was to start a navy of ships. It appears that they would go off and every three years come back with, among other things, peacocks.

The peacock has been used as an ornamental bird for many centuries. The video below gives a view of his feathers spread out.