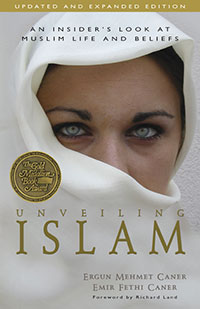 One of the “hot” topics in our society today, as well as that of most Western societies, is the religion of Islam. Because of worldwide Islamic terrorism, recent events in the Middle East and the growth of Islam in our own country, it behooves all of us to have a basic understanding of this religion. There are numerous books available on Islam and its founder, the prophet Muhammad, and I am sure many are quite good. I have only read a small fraction of what is available; however, if one is interested in acquiring a basic understanding of Islam, I strongly recommend Unveiling Islam: An Insider’s Look at Muslim Life and Beliefs

The Caners are brothers who have lived the Muslim life, having been raised as Sunni Muslims. I was drawn to the book because these former Muslims are now Christians and theology professors. I believe they offer a unique perspective on the religion of Islam. Dr. Richard Land (President of The Ethics & Religious Liberty Commission of the Southern Baptist Convention) notes, “Unveiling Islam is exactly what its subtitle describes; it is an insider’s look at Muslim life and beliefs.”

The book is an easy read and provides many examples of the differences between Christianity and Islam; the Doctrines of Salvation and Internal Security are two such examples. There is no comparable concept of salvation (i.e., Jesus paid the ultimate penalty for our sins) in Islam. For Muslims, It is hoped that “salvation” will be earned through one’s good works, but it is up to the “will of Allah” as to whether they will enter Paradise or not; therefore, there is no security for the believer of Islam.

In reading the book, you will learn about:

. All of us need to know what we are or will be confronting as this religion continues to spread in the U. S. and throughout the world.