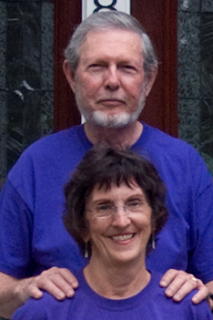 If you attend various services at Faith, you have seen and heard Lou Gentry. And if you read this blog regularly, you’ve seen his name on several articles. If you haven’t read them yet, you really should! Lou belongs to one of the Sunday-morning men’s prayer groups, sings in the choir, and is called on to pray publically on Wednesday nights. If it’s true that “behind every successful man stands a great woman,” you should meet Lou’s wife, Nadine.

Nadine and Lou attended the same very large church but did not actually meet until two weeks before Nadine left for Florida State. God brought them together at a going-away party, they eventually married, and “the rest is history,” which includes three children—two sons, Lance and Lamar, and a daughter, Luann—and seven grandchildren. On September 2, 2011, Nadine and Lou will celebrate their fiftieth wedding anniversary! All of the Gentrys’ children and grandchildren live in the West, so Lou and Nadine spend much of their summers traveling west in their RV and visiting their family.

After Lou and Nadine moved back to Florida from Hiawassee, Ga., a few years ago, they spent a year visiting area churches. They kept returning to Faith Baptist, and the Lord let them know this was where He wanted them. They have become active at Faith, with both singing in the church choir, among other things.

Nadine is an important part of Women’s Ministries at Faith, including serving as a care cluster leader.  She enjoys scrapbooking and making calendars, but her passion is leading ladies’ Bible studies. Since joining Faith in August 2009, Nadine has led four Women’s Bible studies. The fifth one, Fingerprints of God, will begin soon. You have two options if you want to be a part of this Bible study.

Please contact the church office (863-293-0689) if you would like more information about joining either one of these Bible Studies.

Other Posts by Jonita Barram: