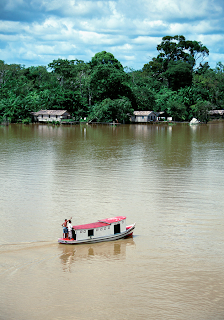 ‘If He Did It Back Then/He’ll Do It Again’

The Southern Gospel group Signature Sound has recorded a song called “The God of Today.” The chorus says:

The Kingdom of Darkness

Several years ago, I got to read Port of Two Brothers: The Amazing Story ofTwo Missionary Brothers and Their Work on the Amazon, by Paul Schlener. Paul and his brother John evangelized and discipled a tribe of Indians called the Ticuna. These pagans were some of Satan’s choicest servants in the kingdom of darkness until “the Father … qualified [them] to be partakers of the inheritance of the saints in the light,” delivering them “from the power of darkness” and conveying them “into the kingdom of the Son of His love, in whom we have redemption through His blood, the forgiveness of sins” (see Colossians 1:12–14). Schlener writes:

“Those people were in a sad state of spiritual, moral, and intellectual darkness.”

Any evil thing that goes on in Winter Haven went on in the Amazon Jungle, and the book gives some horrific details. Drunkenness, knife fights, revenge killings, physical and sexual abuse, thievery—all were a way of life. After the Schleners started ministering among the Ticunas, the two brothers “were convinced that Satan would not let these people go without a fight.” But God gloriously saved many of the Ticunas and transformed their tribe, much like Pastor Osborne’s vision for Winter Haven.

The Kingdom of the Son of God’s Love

When the Schleners started holding Brazilian church services, “in an unprecedented manner, our Indian friends crowded the Brazilian services on Sunday morning,” says Schlener. The missionaries then began Indian services, which were, he says, “inaugurated with at least 100 in attendance. Within a few weeks, the congregation increased to almost 500.” An American pastor who had visited the Schleners’ work encouraged the brothers, writing:

We’re asking God for a great harvest of souls—1,000 of them—why not? Is not our God able? Is this not His will? And if you are faithful, and if we are faithful, what can keep this from being accomplished? God bless you!

God did bless, and the church grew.

the Ticuna “didn’t have a written language, nor could they read or write Portuguese, the language of Brazil. . . . Officially the Indians were considered minors, a nation within a nation.”

So the missionaries opened a small school. Every night, a handful of their students went home and taught their families and neighbors to read and write. Christian Indians later began additional schools, camps, and churches. Several went to seminary and became pastors.

“Literacy, accompanied with biblical teaching, brought higher moral standards, making life better for everyone in the Port of Two Brothers area, including the traders. The Indians began to produce more, but cheat and steal less. It took years of perseverance, maintaining an acceptable reputation in the area, to gain a good relationship with the business people.”

The following testimony illustrates the change in the Ticunas’ lives.

Nearly 800 were present one Sunday when a youth interrupted the service by walking the aisle during Paul Schlener’s sermon. He said:

My father was a pajeh [witch doctor]. No like Christians. Never come church. Come home drunk; beat my mother; beat us whole family. We run, hide in jungle. We poor. No shoes, ragged clothes. We hear neighbors across creek singing. They happy, we sad.

Always neighbors invite Dad go church. Never go. One day Dad go, but stay in soccer field. Listen singing. Hear you two holler. Next time come closer. Stay outside, just listen. Next time come inside, stand in back. One time, he accept Christ as Savior. No more get drunk. Not pajeh no more. No more beat my mother. Work hard. All family have shoes now. Little brothers learn to read and write. Pray before eat. Nighttime recite Bible verses brothers learn in school. If God do that for Dad, can do for me, too. I’m oldest brother, need Christ, too. I accept Him today.

As their lives changed, the believers influenced their unsaved peers. For example, when the missionaries noticed a man and his son-in-law absent from church services, they asked around and learned their family had moved. They also found out why: the two men had murdered a third man on advice from a witch doctor, and their neighbors objected:

All neighbors around, explained one of the Christians, don’t want them live here no more. Can’t do that no more. Old life, long ago; we know God now. Still some believe pajeh, not accept God’s Son yet.

If God “did it back then” for the Ticuna Indians of Brazil (and He certainly did!), “He’ll do it again” for unbelievers in Winter Haven, particularly Inwood.

When we pray, serve, and give, we have a part in that glorious work!